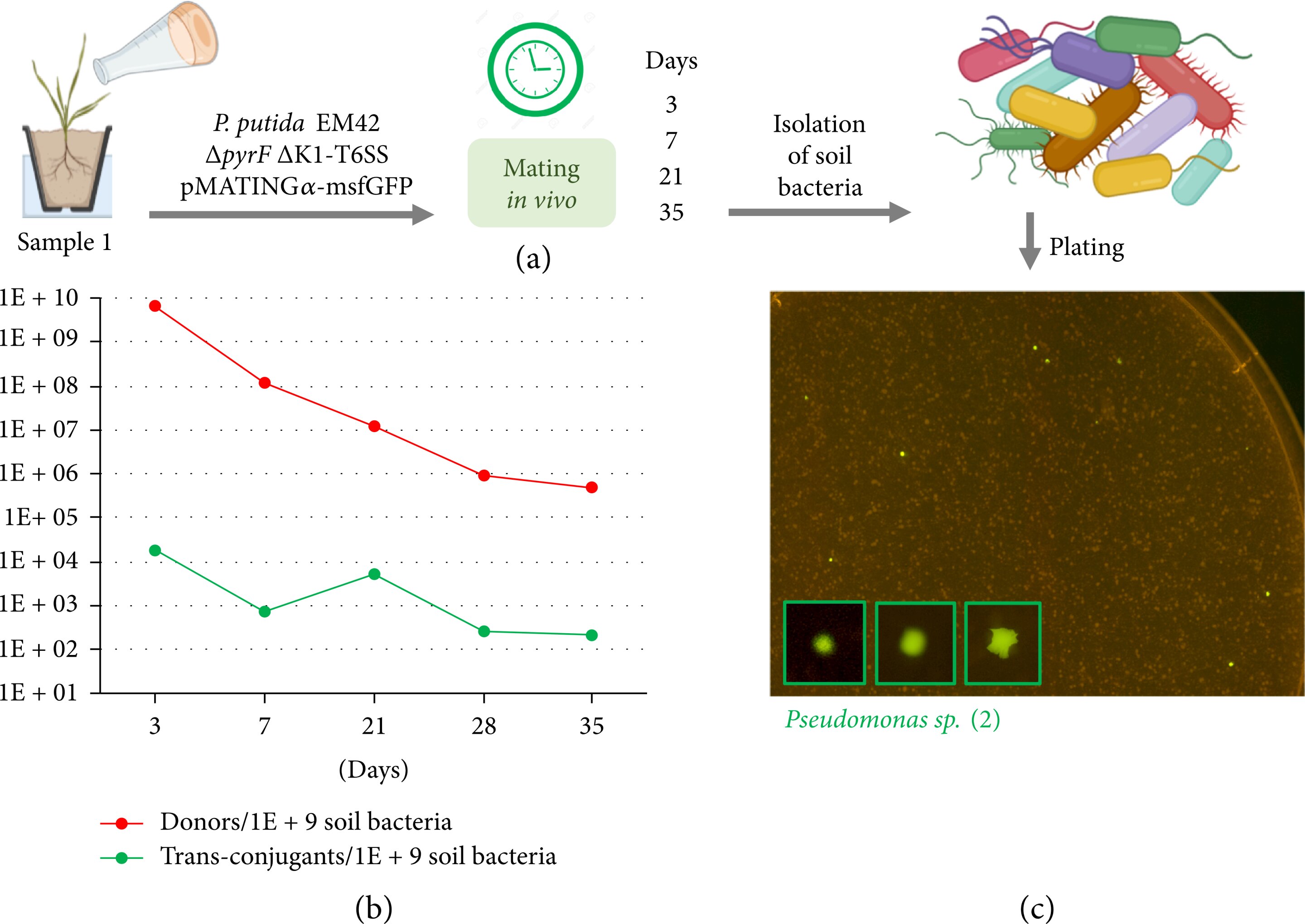 Microbiome engineering is on the forefront of enhancing human well being and agricultural productiveness. It goals to reinforce ecosystem perform by altering microbe composition. This may be achieved by a “bottom-up” strategy involving the introduction of engineered microbes right into a neighborhood.

Nonetheless, resistance from current species hinders the institution of latest members. As an alternative, it’s higher to ship overseas genetic materials utilizing the “top-down” strategy, which entails horizontal gene switch (HGT) between microbes. The first purpose right here is to create environment friendly methods for the unfold of engineered DNA throughout a posh microbial neighborhood.

HGT processes embrace conjugation, transformation, and transduction. The conjugation system carried by plasmid (small, extrachromosomal DNA) RP4 (also called RK2), found in 1969, is a confirmed mannequin of transferring DNA in each gram-positive and destructive micro organism. Furthermore, scientists are actually keen to increase the toolbox for RP4 plasmid-based microbiome engineering throughout a variety of microorganisms.

To this finish, a analysis group from the Spanish Nationwide Centre for Biotechnology in Madrid have reassembled the plasmid RP4 to create a vector that may unfold genetically encoded traits throughout numerous microbial communities.

The researchers modified the purposeful parts of RP4 to create “pMATING,” a scientific self-transmissible plasmid vector. The research was printed in BioDesign Analysis by a group led by Prof. Victor de Lorenzo and colleagues Tomás Aparicio, Jillian Silbert, and Sherezade Cepeda. “The tip results of our analysis was a toolset optimized for gene supply and circulation in pure microbial consortia,” says Prof. Lorenzo.

With this discovering in thoughts, the researchers carried out two extra conjugation checks to switch DNA from E.coli to the gram-positive bacterium Bacillus subtilis and the yeast Saccharomyces cerevisiae. They had been astounded to find that pMATING may switch DNA to each recipients, indicating a “transkingdom conjugation” from micro organism to fungi, an idea that has hardly ever been reported elsewhere.

The researchers then investigated if their newly created plasmid may unfold to totally different bacterial species. Impartial microbial swimming pools had been remoted from soil samples taken from two totally different areas in Spain, and pMATING switch was tracked utilizing a green-fluorescent tag. Besides a couple of, nearly all of these isolates had been in a position to efficiently obtain the DNA.

This switch was additionally validated in an out-of-laboratory pure soil pattern lined with P. putida donor micro organism. These outcomes seem to handle a serious concern in regards to the utility of HGT to micro organism dwelling within the pure atmosphere.

Whereas the research solutions most questions on vector switch throughout bacterial communities, the largest unknown is whether or not recipients change into donors after receiving the plasmid. “It’s true that pMATING permits micro organism to go on the plasmid to different micro organism. Nonetheless, this isn’t all the time the case. This isn’t as a result of recipient’s incapacity to just accept overseas DNA. Fairly, some donors could also be reluctant to offer their DNA to different species,” Prof. Lorenzo explains.

Whereas earlier research have reported conjugative switch amongst numerous microorganisms, pMATING is the primary to ship genes throughout environmental microbiomes. Prof. Lorenzo concludes, “With its comparatively small measurement and ease of use, pMATING2 generally is a unbelievable device for gene circulate throughout complicated bacterial communities. Future vectors impressed by will probably be helpful in boosting goal microbial niches for medicinal, environmental, and industrial purposes.”

This doc is topic to copyright. Other than any truthful dealing for the aim of personal research or analysis, no
half could also be reproduced with out the written permission. The content material is offered for data functions solely.